It is almost the half way point in the Valvoline Irish National Forestry Championship, and next week we head into the depth’s of Tipperary for the Sean Conlon Memorial Rally. Recent changes have seen the rally move from it’s well established early spring date to the summer month of June. This is almost certainly the biggest change, and other than that, as the rally has a good base of forests to choose from, and once again they have chosen a good route with lots of intrest, and a good challenge too boot. As with the other championship rounds this year, we have produced a short sample video to give an idea of the conditions in the forests. Hopefully, it is of intrest. 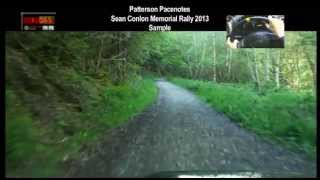 Patterson Pacenotes crews have dominated the championship so far this season, winning every event and proving once again that the Patterson Pacenote package is unrivalled in its quality and professionalism.  Notes and Safety DVD’s are currently being despatched and can be purchased on line @ this link