The Neath Valley Stages has made the step up to the newly formed RAC Historic Championship, and to meet the challenge, the rally has also stepped up with a move into the bigger forests in the Neath Valley area. With stages in both of the classic Rheola and Margam Forest’s, this could be the only opportunity that competitors get to compete in these former Rally GB stages this year. It is well known that Wales Rally GB will move to more northern stages for 2013 at least, and almost certainly for the next couple of year’s as wind farm development is restricting the use of some of the more classic south Wales forests. Neath Valley Clerk of the Course, Den Golding has asked us to post a little sample video of this year’s stages, just to highlight how good the stages are. We cant disagree, it should prove to be a fantastic event for all concerned. 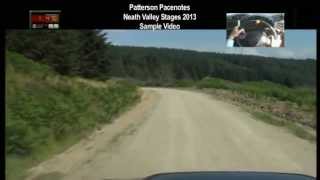