Always renowned as a tough rally, last weekend’s Rally Argentina wasn’t made any easier by muddy roads and overflowing water splashes following days of heavy rain. Thierry Neuville shrugged off all the difficulties to take a meritorious victory. Belgian driver Neuville in the works Hyundai i20, co-driven by Nicolas Gilsoul, didn’t lead all the way, but he led when it mattered.  This result extends Neuville’s lead over Ogier to 10 points, with Ott Tanak now 28 points behind the leader and Kris Meeke 4th on 54. Andreas Mikkelsen, Hyundai teammate to Neuville, shrugged off a lethargic showing in recent times to take a fighting 2nd place.

World Rally Champion Sebastien Ogier pushed his Citroen hard throughout, lost some time when his C3 WRC clipped a gate post, suffering damaged steering. He then drove in a very determined manner indeed to set some fastest times, but then on some tests didn’t really crack it until near the end when he came through to the final podium place and also set fastest time on the El Condor Power stage. 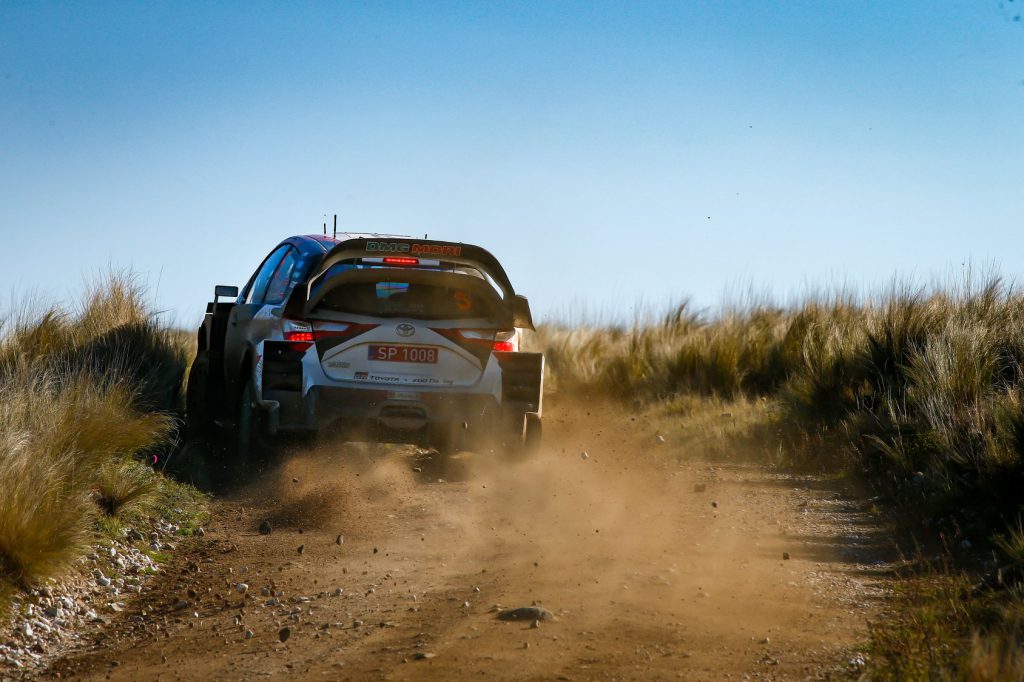 Kris Meeke seemed to be heading for that podium position but dropped back because of a small road penalty and a final stage puncture on his Yaris. Earlier in the rally Kris was going really well, but then couldn’t slow his car enough going into a water splash. He hit the bank on the way out, puncturing a tyre. Kris eventually finished fourth and ‘best Toyota’. In some ways it was a disappointing rally for Meeke. He drove sensibly and well most of the time, and was in the leading frame on the Friday, but the mud and a few small problems dropped him back. So, not a bad result, but perhaps on this occasion he deserved a little better. In a way the road penalty typified his weekend – he and a couple of other drivers were penalised for taking the obvious and shortest route past a cattle grid, not over it as instructed to do in the road book. The ‘easy’ way was not taped off for the first run over the stage. Ogier seemed to make a fuss over this so-called short cut, whereas he went over the grid and damaged his Citroen’s steering. Ott Tanak and Mads Ostberg also received the same penalty.

Anyway, Kris went out on the Sunday with ‘a face’ on, proceeded into flat out mode to get past Ogier and on to the podium, but cut one corner too many over rocks and suffered that front left puncture. There is no doubt that Kris has the personal speed and the car to win the WRC, but points make prizes.  Jari-Matti Latvala, also in a Yaris and on his 200th WRC rally, was 5th and Dani Sordo 6th.

Ott Tanak led the rally for a while early on, but a damaged driveshaft and then a recalcitrant alternator relegated the Estonian out of the running. Welshman Elfyn Evans had an unfortunate accident, his all sideways Fiesta WRC clipping a huge rock and tumbling over in most dramatic and frightening fashion.

Another rally on virtually the other side of the world was the Olympus in the USA. 17-year-old Oliver Solberg, watched by his father Petter, put up a stunning performance to take victory, driving a Subaru USA team Impreza. Unfortunately, Oliver’s regular N.I. co-driver Aaron Johnston, couldn’t get his travel arrangements to work and Denis Giraduet stepped into the co-driver’s seat. David Higgins/Craig Drew in the other USA works Subaru were 2nd, 13 seconds behind young Solberg. Seamus Burke/Martin Brady had a very good result as well, 4th in their Fiesta R5.

Also last weekend, another of the many events to take place was the Pirelli International and Historic event in Kielder. Matthew Robinson/Dave Robson won the Historic section, from Joe Price/Chris Brooks with Adrian Hetherington/Ronan O’Neill 3rd. Ford Escorts were the car of choice throughout the leaderboard.

Co. Down’s Stanley Orr in his Mk1 RS 1600, co-driven by Graham Henderson was 7th o/a and won their class, which leaves them well placed in the British Historic Championship. Stanley recounted afterwards. “We had a good run, no bother. We were trying a different make of tyre, and they worked well, maybe a little down on sideways grip. The stages were fast and long, a real challenge.” Nick Elliott went off the road at a long fast right-hander into a chicane. Stanley was the first competitor to stop at the accident. Unfortunately, Nick, normally the pace setter in the Historics, suffered a fairly badly broken wrist. 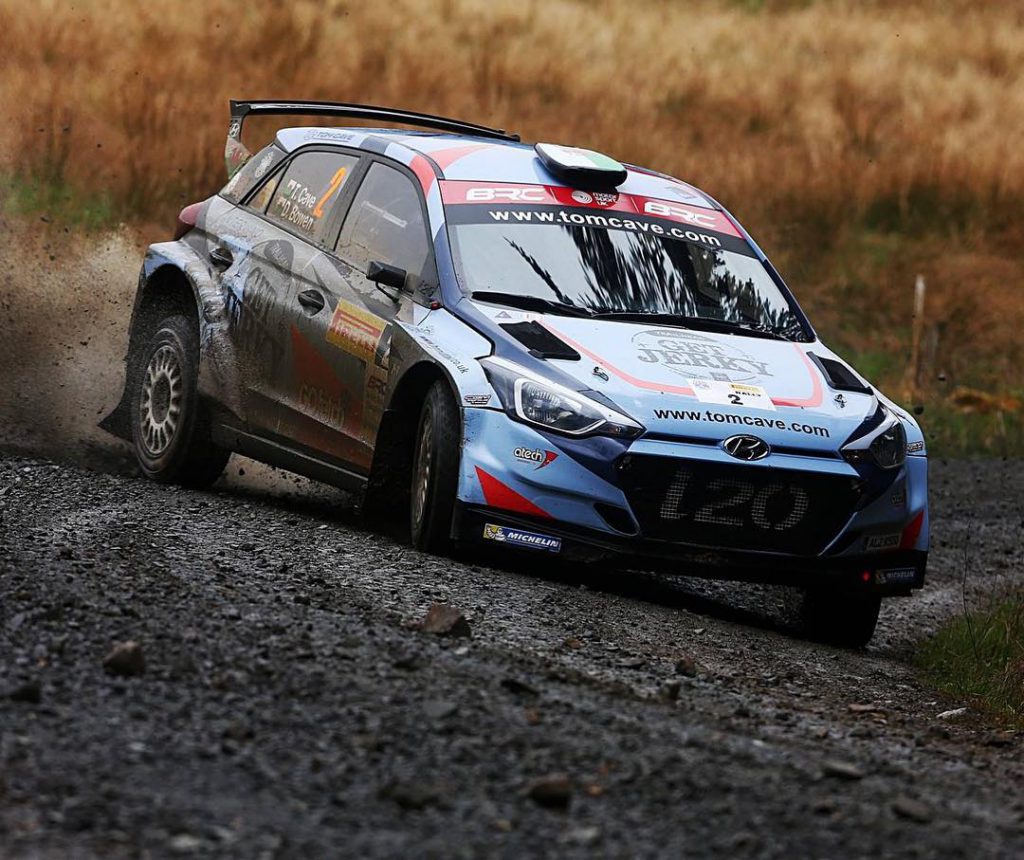 In the International/British Championship part of the rally, Tom Cave/Dale Bowen in their Hyundai i20 R5 were victorious, finishing 17 seconds ahead of Rhys Yates/James Morgan in their Fabia R5. Finnish visitors Jari Huttunen/Antti Linnaketo in their Hyundai posted some very good times, fastest towards the end, and finished 3rd. David Bogie/John Rowan were 4th, just 2 seconds behind the Finns. Last year’s Pirelli winner and current British Rally Champion Matt Edwards was forced to retire his Fiesta R5 from this one following punctures on the opening leg. Josh McErlean/Keaton Williams had a gr 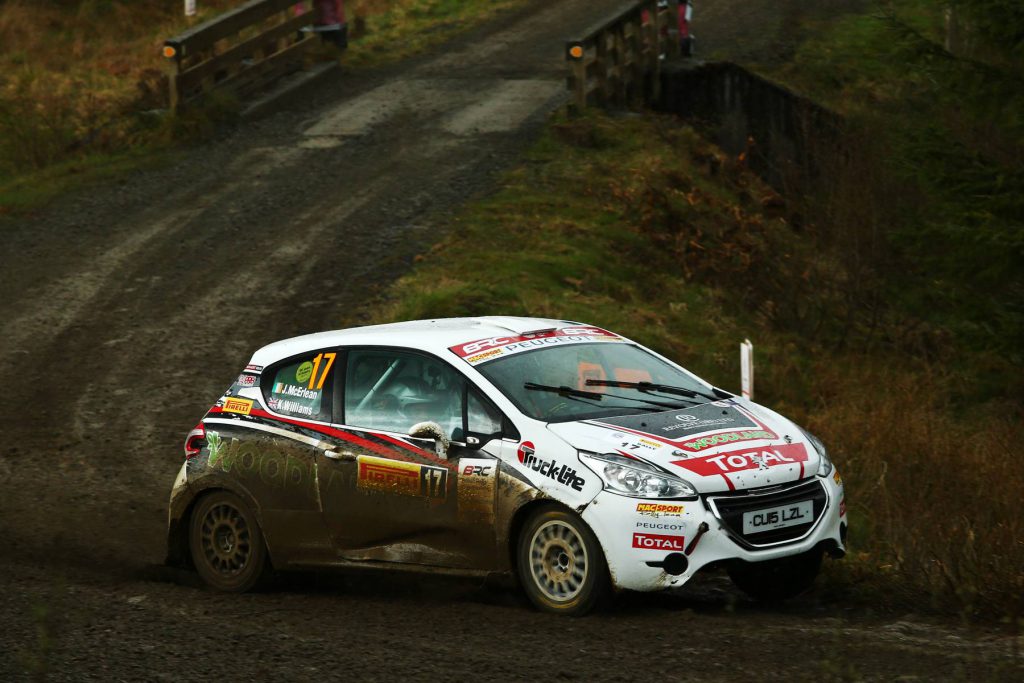 Also on Saturday the Cookstown Club ran a Lanes Rally, some of it in Davagh, and despite the inclement weather, the crews reportedly had a ball.   David Burns/Connor Murphy in a Fiesta took top honours from Steven Cromie/David Stewart in a Mazda RX5 who were 14 points in arrears. Third was Douglas Reid/Dion Coyle in another MX-5. The event had a full entry of over 80 cars.

The MG Car Club (Ulster Centre) ran the Derek Walker Trial in the Ards Peninsula, and the weather didn’t dampen the enthusiasm of the 45 crews competing there either. The rally was based at the interesting and very attractive Echlinville distillery near the village of Rebane. Will Corry/Pete Moreland-Moore took victory in their MG Midget from the similar car of David Cochrane/Ruth Steele. Christopher Evans/Laney Fitzpatrick were in an Escort and finished 3rd.

Then on Sunday we had the Monaghan Stages Rally. The battle for the lead was pretty intense, with Donagh Kelly/Conor Foley in their ultra successful Focus WRC eventually taking the win by 5 seconds from Josh Moffett/Andy Hayes (Fiesta WRC). Moffett seemed to have the edge during the early part of the 9 stage event. Moffett dropped around 19 seconds with a puncture, and despite a hard charge over the afternoon stages couldn’t get back in front. Roy White/James O’Brien had a very good run over the technical stages and brought their Fiesta WRC into 3rd. Declan Boyle finished 4th, Sam Moffett 5th and Darren Gass 6th. Kevin Eves/Chris Melly again produced an amazing drive in their Corolla to finish 8th o/a and ‘best two wheel drive’.

The Monaghan event was round three of the Triton Showers National Championship, and Josh Moffett’s 2nd place on the rally sees him remain top of the points with 59, Roy White has 50 and Peadar Hurson is 3rd on 39. Newry man Peadar indulged his Fiesta WRC in a few spins during the event and finished 10th.

Dessie Nutt and co driver Geraldine McBride tackled the Clacton Stages Rally in Essex. Castlerock man Dessie reported that the organisation and the closed road stages were very good. Also that Geraldine was excellent on the notes and the car went well. Yet Dessie says he didn’t enjoy it, because he felt as if he drove ‘like an old fool!” His Porsche felt skittish and he lost confidence, and if you back off in a Porsche the car will under-steer and bite you. He thought it could have been something to do with the fact that the tyres on the car are four years old! Dessie and Geraldine did however win their Historics category. Still, in an effort to get back in the old groove, Dessie has arranged for new tyres to go on the Porsche and has made a late entry for the Manx National. He is heading off to the Island this Sunday to start his recce and to tackle stages, or at least some of the same roads, which he has traversed on and off for the last thirty years. Somehow when Dessie started to chat about the Manx stages, inexplicably a few bars of the Phil Coulter song “The town I loved so well” came to mind! Such seems to be his affinity with the classic Isle of Man stages. We wish Dessie luck next weekend!

The Clacton rally which first ran this time last year as the first rally in England to have proper closed road stages, was won this year by Thomas Preston/Carl Williamson in a Fabia R5. Michael O’Brien had Mark Glennerster on the notes and they were 2nd in a Focus WRC.

Looking forward to this weekend, the Cartell.ie Killarney Rally of the Lakes has a strong entry – and a very tough, dramatic route as well. Craig Breen/Paul Nagle in their Fiesta R5 will lead the 150 competing cars out to the opening Molls Gap special stage on Saturday morning. Manus Kelly/ Rory Kennedy are at 2 in their Hyundai R5, followed by Alastair Fisher/Gordon Noble (Fiesta R5), with Josh Moffett/Keith Moriarity (Fiesta R5) 4th on the road. Then it is Robert Barrable/Damien Connolly (Fabia R5) and Desi Henry/Liam Moynihan (Skoda) making up the top six. There are plenty more drivers capable of taking a top result in Killarney, with Callum Devine and Jonny Greer particularly springing to mind after both impressed on the recent Easter Stages.

Clerk of the Course Dermot Healy has arranged a somewhat different rally this time, with some old favourites such as Cod’s Head, Ardgroom and Healy Pass to run in the opposite direction to which the drivers are used to. There will be three runs over Molls Gap, and the rally is planned to finish at 5pm on Sunday outside the Gleneagle Hotel after 16 stages, 230 km of competitive motoring. The rally will include all manner of classes as well as Historics, Juniors and an ‘exhibition’ class of pre 1990 cars from the golden days of rallying. This is the 40th anniversary of the Killarney Rally of the Lakes, and it looks like it could be a very special event indeed.