Unexpectedly it was announced last Saturday evening that Triton Showers would continue their title sponsorship of the MI National Rally Championship through 2020. The occasion was the annual National Championship Awards ceremony, which was held in the Sheraton Hotel Athlone. It was widely believed that after five years the Triton Showers association with the series would end, but Triton Showers’ main man in Ireland Kevin Barrett took nearly everyone pleasantly by surprise when he announced out of the blue that the company was to continue what has become the country’s blue ribbon National Championship. Kevin’s heart is very much in rallying and he was reluctant to leave the Championship in the wilderness with no sponsor, hence the change of heart. There will be 7 rounds, with 6 to count, in 2020:

Some of the main players collecting their awards on Saturday Night included the new champions Josh Moffett/Andy Hayes. Their names go on to the prestigious Vard Trophy. Interestingly Josh is the fifth different winner in the five years of the Triton backing. Former Champion Roy White and his co-driver James O’Brien collected the runner-up Trophies. Third placed driver was Kevin Eves and he was also the tops in ‘2 Wheel Drive’, while Anthony Nestor was the 3rd placed overall co-driver and he also received the best GpN co-driver award. Kevin Eves’ co-driver Chris Melly received the 2WD co-driver Award and was 4th o/a in the standings. Shane Maguire won the GpN Award. 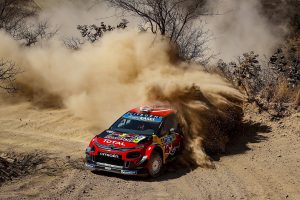 Not unexpectedly it has been announced this morning that Citroen have withdrawn from the WRC.   Their statement cites “Following the decision of Sebastian Ogier to leave Citroen Racing after the 2019 WRC season, Citroen decided to withdraw from its WRC programme in 2020 due to the absence of a first class driver for the 2020 season.”

County Monaghan’s Stephen Wright is now confirmed as the 2019 McGrady Insurance Motorsport UK NI Stage Rally Champion, Stephen saying, “ Taking on any Championship was not on my radar at the start of the year but the competitor friendly format and variety that each event in the Championship offered kept bringing me back.” Stephen finished the foreshortened series (the last round did not run) in a tie position with Derek McGarrity and Stephen took the title on a count back tie decider. He is the first driver from the Republic of Ireland to win the NI series. Champion co-driver title went to Derek McGeehan’s son Mark. Derek led the points for much of the season but it all came to naught when he retired from the Tyrone Stages, his Mini WRC ‘going off’ a cylinder. Derek then ended up 3rd in the series, with 8 times NI Champion Derek McGarrity runner-up. John Devlin just pipped James Kennedy at the last gasp for the coveted 2 wheel drive title. Beragh’s Adam Vance was the GpN winner, Belfast’s Kyle White the best Junior. Drew Wylie once again captured the Historic title.

Next season’s NI Championship is being revamped to consist of just five asphalt rallies. The reasoning behind the all-asphalt format seems to be that some competitors found it too expensive and time consuming converting their cars for different disciplines. In addition to the NI Championship there will be an ANICC Gravel Cup consisting of four rallies – Fivemiletown, Fermanagh Lakelands, Bushwhacker and Mid Antrim.

The five NI Championship rallies will be:-

In addition to these changes, the management structure of the ANICC is also changing. Nicky Moffitt has been the hard working secretary for 39 years and been on the Council for 42. He has done the most marvellous and comprehensive work for NI Motorsport all those years. He will still be involved, and will give the incoming secretary Grace King all his assistance. Nicky is working more than ever with Motorsport UK and will be taking over the chair of the Rallies Committee in the New Year from Andrew Kellett. Nicky will also be on the board of Motorsport UK next year. Other changes include Robert Harkness stepping down as President of the ANICC and Donald Grieve moving up from vice President to President.

This weekend rallying at home will mainly be concentrated on the North Ulster Car Club’s Targa Rally this Saturday 23rd November, officially titled the John Mulholland Friends of the Cancer Centre Targa Rally. Over 100 entries have been received, with the top six seeds being Chris Evans (Toyota), Paul Mooney (Nova), Robert Woodside (MX5), Eric Patterson (MX5), David Crothers (MX5) and Douglas Reid (MX5). Such is the quality of the entry that there are top names scattered throughout the field – Mark Francis for example is at 8, Eamonn Byrne at 11, Dermot Carnegie at 15 and Frank Lenehan at 17.

Also this weekend is the Roger Albert Clark Rally through the forests of Wales, Kielder and South West Scotland. The rally actually starts this Thursday evening from Leominster on the Welsh border and there will be two stages through the fast but tricky Radnor forest in darkness. On Friday the crews will tackle some classic Welsh stages. They then have a long transit section up to Carlisle for a Friday night rest halt. Saturday sees tough stages through Kielder, then it is into the Scottish forests on the Sunday and back to Kielder on the Monday: 32 forest stages in total. It will be a long haul for the drivers. No.1 seed Marty McCormack freely admits it is the most demanding and draining of rallies. Draperstown man Marty will have Barney Mitchell co-driving in his Escort and is aiming for his third Roger Albert win. With almost 160 crews on the entry list, and with some very talented drivers in fabulous cars, this very special rally, a throwback to rallying’s glory days, will not be an easy one to win. 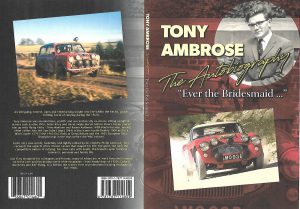 Generally at this time of the year, on the run-up to Christmas, there is no shortage of Motorsport books on offer. One that particularly caught our eye is “Ever the Bridesmaid”, the Autobiography of Tony Ambrose. The late Tony Ambrose raced and rallied an MG TC in his early days and then was asked to partner Lyndon Sims in an Aston Martin DB2/4 to contest the RAC Rally – which they won. Fairly soon Tony Ambrose was adopted into the BMC Competition team and co-drove for many top drivers in Minis and Austin Healey’s, eventually winning the European Championship in 1965 with Flying Finn Rauno Aaltonen, who was also known as ‘The Rally Professor’. Ambrose was one of the first BMC team members to request a ‘recce’ car to go and make notes of the stages, a pioneer really of Pacenotes to make the stages faster and safer. His red MG TC, GGC865, has sadly disappeared in the mists of times. The book is reportedly a delight, giving much insight into those halcyon days when BMC cars ruled the rallying world. ‘Ever the Bridesmaid” was published by Veloce Publishing, but seems quite hard to obtain. We located one under the ‘Mini Sport’ banner – just the job as a Christmas present!

Last minute snippets – The first closed road stage rally in the New Year looks as if it could be a new Donegal mini  stage event, located at Termon Kilmacrennan on January 25th……  Peugeot Sport has launched a new rally car – the 208Rally4……Next weekend’s Killarney Historic Rally is all on course but one crew Rob Dennis/Andy Boswell are short of a spanner man to help with running their FIA MK2 Escort.  The mechanic that usually helps them has been diagnosed with illness.  Andy Boswell’s mobile number is 0044 7946674244…….The MG Car Club (Ulster Centre) are running the first test (at TTS Nutt’s Corner) of this Saturdays’ North Ulster Car Club’s Targa Rally……The 500 Motor Racing Club are organising a rally car test day for December 7th at Kirkistown……the Irish Racing Car Show takes place this weekend in Dublin’s RDS……….The Manus Kelly tribute night this Saturday in Letterkenny is reportedly a sell-out with 600 tickets sold and the hotel is having two sittings to cope – a measure of the magnitude of the tragedy of Manus Kelly’s fatal accident plus the high esteem in which he was held.

The finalists for Motorsport Ireland’s Billy Coleman Young Rally Driver of the Year Award have been announced. David Kelly (24), from Donegal Town, has been named alongside Derek Mackarel (23), from Clones, Co Monaghan, and Josh McErlean (20), from Kilrea, Co Derry.

All three drivers are in the running for the prestigious Motorsport Ireland Billy Coleman Young Rally Driver Award, which has a prize fund of €100,000.